Hydrogen flow measurement is in demand in various industries where the production technology provides for the use of this gas. For example, in oil refineries it is used to obtain fuel from high-sulfur heavy raw materials. Large volumes of technical hydrogen are used at metallurgical enterprises for heat treatment of cold-rolled steel; in the energy industry, it is used to cool powerful turbine generators at thermal power plants and nuclear power plants. In the food industry, this gas is used for the production of margarine by the hydrogenation of liquid vegetable fats. Also, hydrogen is needed for the production of ammonia, steel, aluminum and other products.

To measure hydrogen according to commercial metering standards, the EMIS product line includes three types of hydrogen-based instruments. These are vortex flow meters "EMIS-VIHR 200", Coriolis flow meters "EMIS-MASS 260" and variable area flow meters "EMIS-META 215". The choice of this or that type of device depends on the characteristics of technological processes at the Customer's enterprise. 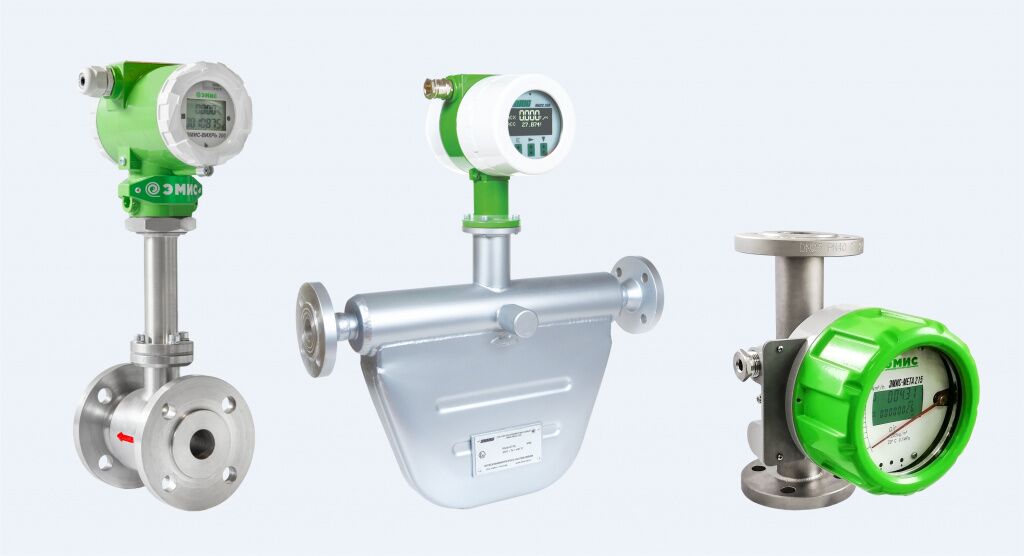 It should be noted that the measuring equipment of EMIS designed for hydrogen metering is undergoing special additional tests. The explosion protection level corresponds to category II, subcategory IIC.

The vortex flowmeter "EMIS-VIHR 200" became the first in the product line of the EMIS company to receive a special hydrogen version. It was introduced into a separate specification "Vd" in 2020 simultaneously with the implementation of experimental and design work to improve the metrological and operational characteristics of the device. As a result of the upgrade, the EMIS-VIHR 200 flowmeter, in addition to the “hydrogen version”, received the ability to calculate the mass flow rate and mass of liquids, natural and wet petroleum gases, saturated and superheated steam, as well as the volume flow rate and volume of gas reduced to standard conditions with a standardized accuracy.

This year, algorithms for calculating the flow rate of hydrogen, nitrogen, argon, acetylene and ammonia in accordance with GSSSD MR-134-07 were introduced in the secondary converter of the vortex flow meter EMIS-VIHR 200. At present, these algorithms are undergoing the certification procedure, as a result of which the function of the calculator of the device will be possible for use in the commercial metering of hydrogen.

Note that the function of bringing gas measurements to standard conditions in accordance with the standard GSSSD and GOST methods is available for the secondary converter of the EMIS-VIHR 200 flow meter with an extended version of the electronics with a built-in calculator and the ability to connect external pressure and temperature sensors.

Among the new technical advantages of the EMIS - VIHR 200 meter is also the accuracy at the level of the best world analogues: the measurement error for gaseous medium is ± 0.7%, and ± 0.5% for liquid medium. High metrological characteristics of the vortex flow meter were achieved, among other things, due to digital processing and filtering of the sensor signal.

In particular, special filters made it possible to minimize the effect of industrial vibration when measuring hydrogen on cooling units of turbine generators at a number of thermal power plants in the Chelyabinsk region. In total, within the framework of the technical re-equipment project, to heat power facilities of the South Ural in 2020. 26 EMIS-VIHR 200 flow meters of the Vd version (hydrogen version) were supplied.

Photo 2: Installation of "EMIS-VIHR 200" on the cooling unit of the turbine generator.

A special "hydrogen version" is available for the compact version with a nominal diameter of 10, 15 and 25 mm.

Among the advantages of the EMIS-MASS 260 Coriolis mass flow meter: high accuracy, which in relation to gaseous media is ± 0.35%, no requirements for straight sections, the possibility of automatic compensation of flow and density by temperature.

Measurement of hydrogen volume and volumetric flow rate both in working and standard conditions can be carried out using a metal rotameter "EMIS-META 215". On the basis of the technical process data received from the Customer, during manufacture at the factory, the variable area flowmeters are set to measure under standard or operating conditions (optional). However, such a solution is optimal only in cases where the pressure and temperature are unchanged, since correction of measurements is impossible, and the settings of the rotameter are constant. Note that in addition to measuring the current volumetric flow rate, EMIS metal rotameters are able to summarize and display the accumulated volume (volumetric flow). Rotameter "EMIS-META 215" can be installed on the pipeline both in vertical and horizontal position, while the following options of connection to the process are available: coupling, flange and clamping. Another of the clear advantages of EMIS metal rotameters is a five (5) year calibration interval.

Following the market demands, at present CJSC "EMIS" is carrying out the next R&D work on the development of a line of devices of "hydrogen execution".

The company "EMIS" is always ready to offer advanced equipment for metering industrial gases in a short time and with a full package of permits and regulatory and technical documentation.

To order instrumentation of the EMIS trademark, fill out the questionnaire and send it to sales@emis-meter.com.